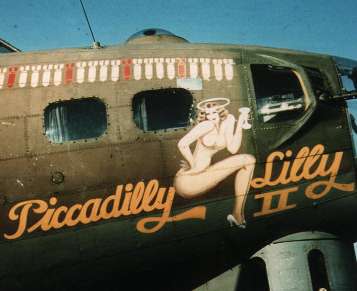 This was the replacement aircraft for an earlier similarly named B-17F which was shot down on 8th October 1943. "Lilly II" took off for its first combat mission on 5th November 1944 and completed 32 successful sorties before over-running the runway on take-off on 27th June. Having sliced across a road and drainage ditch before ending its run on a field, the plane was too badly damaged to be repaired.

Frank Stevens painted a beautiful nude (one of the few seen at Thorpe Abbotts) on the right side of the nose. It was a considerable improvement on his earlier version painted on "Piccadilly Lily" which had been the Fortress flown to Regensburg with Beirne Lay who later immortalised that plane when he wrote "Twelve o'clock High".


No mission listing is currently available for this aircraft