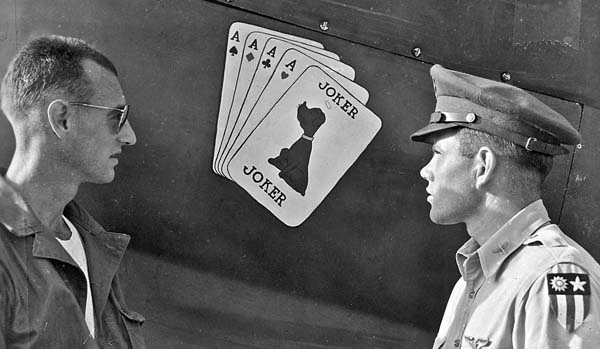 Photo courtesy of Bob Bourlier
Captain Ray Darby's Warhawk displayed a five card spread painted by Phil Dickey with a halo-ed puppy as the Joker. Darby flew as many as 20 missions during August 1944 from Kweilin, sometimes twice in one day. On the 8th August he had the hydraulics shot out and, unable to lower the landing gear, was forced to belly in. Most of the missions at that time involved bombing and strafing troop concentrations and on 29th August he led several P40s in a diving bombing attempt on 50 or so Japanese tanks. It is thought that he finished his combat tour during September and returned to the USA. I would be pleased to hear from anyone who has further information on Capt Darby and his history with the 118th TRS
No mission listing is currently available for this aircraft