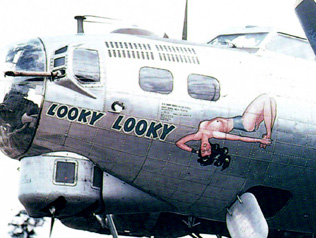 Looky, looky indeed! Many a homesick airman or ground pounder must have looked at Cowan's languishing girl and longed to return home to such a treat. The underwear looks to have been added as an after thought with little of the brush work of the figure, or possibly as the result of an order to "cover up" before the plane headed back to the USA. Many returning crews recall receiving such as order as they prepared to fly home and some remember hastily painting on some skimpy item of clothing to spare the modesty of the nose art girl and the blushes of the civilians back home. Some mischievous crew men retell how they used a water based paint for such a task, receiving official approval for departure only to find that the water soaked atmosphere of a North Atlantic crossing soon washed off the artwork to reveal, upon landing in the US, the nude's full glory! No signature can be seen on Looky Looky but the style is unmistakably Cowan's. This Douglas built Fort was a late arrival in the war zone, not reaching England until 7th January 1945 and being assigned to 851st Bomb Squadron. It too survived the combat in the skies over Germany and returned to the USA on 12th December to be passed onto to RFC Kingman for scrapping.
No mission listing is currently available for this aircraft